In this post we’ll look at Gradle, its installation and configuration, and how to automate stages of development and release of software through its base concept, the Gradle tasks.

Gradle is a build and automation tool, that can automate our building, testing, deploying tasks and many more. Gradle is the next generation build system for Java technologies that includes some advantages from older tools like ant or maven. Let’s have a look:

Want to master Gradle ?
Subscribe to our newsletter and download the Gradle Build Automation Handbook right now!
In order to get you prepared for your Gradle development needs, we have compiled numerous recipes to help you kick-start your projects. Besides reading them online you may download the eBook in PDF format! 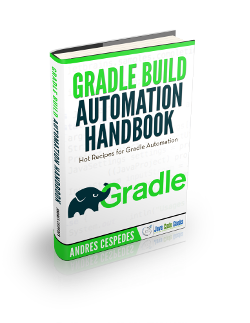 Today, we work on large projects that need automated release process to mitigate risks and failures; a building system as Gradle, permits you to structure a process from the compilation to the deployment in your application server. This approach has several advantages, like spending time on more important tasks for our project (like modeling and coding features) and delegating repetitive tasks to Gradle, or also the use of Groovy dynamic language scripts (DSL) instead of too long xml files.

If you want to do continuous delivery and make your release process automatic, Gradle is a nice tool to carry out these goals. Then, we have to set enviroment variables to get a full access to Gradle, so create the GRADLE_HOME variable that point to the earlier directory that you set.

Note: The screenshots shown here are taken from Windows 8. Your version of Windows may vary. Next, in the PATH variable add the bin directory of the Gradle installation with %GRADLE_HOME%\bin, with this we can run Gradle from any directory. To verify that Gradle was successfully installed, go to the console (cmd shell) and run this command: gradle -v

The Gradle’s starting point is the build.gradle file. Any task or project starts with this script. With the default naming convention, this file is called, but we can define any name to our build gradle scripts.

In the example, the first task of gradle is called helloWorld, with using Groovy language we call the Java’s method System.out.println with the Groovy’s shorter equivalent println to print a short message in console.

To execute the build script, go to the directory where you saved the file and execute the task, running this command:
gradle helloWorld, this will be the output.

As any Java based tool, Gradle can set JVM Options to manage the memory space and another stuff. We can use the environment variables GRADLE_OPTS or JAVA_OPTS, this configuration prevents an OutOfMemoryError setting stable values. For example, we can set the maximum memory allocation pool adding the value -Xmx512m in the GRADLE_OPTS variable.

In our first basic task helloWorld we can see what happens:

Yes, the double << is the short form to define the doLast task’s block. We suggest you to use the shorthand way.

Gradle has basic commands that help us to write a more readable and clean code or scripts. Every command have to the shorthand and longhand way to run them. In this post we have only worked with the most basic concept tasks, but can we do more than just print some text on the screen?

If we execute the command Gradle tasks, we get the following output:

Displays the list of tasks that we do, including default tasks and in other tasks that we define. So, Gradle is like an agent that perform tasks to carry out the projects that we model.

Another important concept is the Default Tasks, which are the tasks that run if no task name indicated. Modify the build.gradle script like this:

If we run gradle in the console, it will execute the beforHelloWorld task.

The biggest basic concept that we cover in this tutorial is task dependency. What does that mean? Gradle adds prevalence on execution of dependency-on task instead of the task that depends on it. Modify the build.gradle file as follows:

If we run gradle -q The output will be:

The last basic and useful tip about Gradle tasks, is the abbreviated calling.

In Gradle, if our task’s name is so long, we don’t need to write the complete name to execute them, only specifying the initials in a camelCase format can execute the tasks.

If we run gradle -q hW The output will be:

Gradle using regular expressions matches the name of task (helloWorld) and execute it.