I graduated from Silliman University in Dumaguete City with a degree in Bachelor of Science in Business Computer Application. I have contributed to many Java related projects at Neural Technologies Ltd., University of Southampton (iSolutions), Predictive Technologies, LLC., Confluence Service, North Concepts, Inc., NEC Telecom Software Philippines, Inc., and NEC Technologies Philippines, Inc. You can also find me in Upwork freelancing as a Java Developer.

Welcome to the Git Tutorial for Beginners. What is Git? Git is a free and open source distributed version control system. It was originally developed by Linus Torvalds, the creator of the Linux operating system. Git is fast and can handle projects of different sizes. If you have a software project, chances are you will rely on Git for version control.


Want to be a GIT Master ?
Subscribe to our newsletter and download the GIT Tutorial eBook right now!
In order to help you master GIT, we have compiled a kick-ass guide with all the basic concepts of the GIT version control system! Besides studying them online you may download the eBook in PDF format! 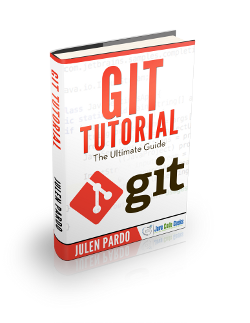 The example here was tried and tested on a Windows machine. I suggest you download Git for Windows so that you can follow this tutorial. Follow the Git for Windows installation instructions there. Yes, there are Git GUI clients out there but in order to learn what the GUI does, we have to go to the command line. You’ll need to be familiar with the bash shell because Git for Windows emulates the Git bash shell.

Hopefully in this Git Tutorial for Beginners, you’ll find it easy to learn. I have always learned by doing, so enough talk and let’s get down and dirty with Git.

Still inside the “practice” directory. The commit log should read like a story. Each commit should be a short step that makes sense together. It should have descriptive commit messages. It should be small steps so that commits are just minutes apart. Don’t start a new step without finishing an old one. Pull frequently so that you are always working on the latest copy of the project. When you take too long between pulls, changes from other people become harder to merge.

Here’s a real world example of a commit log:

Resolve the conflict by editing the file and then git add, commit and push.

Repositories usually exist in multiple branches to allow continued support of old releases or to avoid introducing experimental code to a stable branch. Once a feature branch is finished, it should be merged back to the master branch.

11. Finding When a Bug was Introduced There you have it. You have just performed the most common operations in Git. When you join a team, you will do a git clone. At the start of your working day, you do a pull to get the latest copy. You then make your changes, commit it and then push. This is the most common cycle you will be doing. It’s okay to commit partial work but push only working builds.

What a useless tutorial! this is not for beginners but for intermediate users. Can’t even get by the first instruction “create a practice directory”. How do you do that in GitBash? I’m not familiar with the Linux commands which I presume you use. The use of Git with its commands was ok but get me there first.