Byron is a master software engineer working in the IT and Telecom domains. He is an applications developer in a wide variety of applications/services. He is currently acting as the team leader and technical architect for a proprietary service creation and integration platform for both the IT and Telecom industries in addition to a in-house big data real-time analytics solution. He is always fascinated by SOA, middleware services and mobile development. Byron is co-founder and Executive Editor at Java Code Geeks.

This is an example of how to create a file lock in Java. Creating file locks using Java NIO Channels implies that you should :

as described in the code snippet below.

Want to be a Java NIO Master ?
Subscribe to our newsletter and download the JDBC Ultimate Guide right now!
In order to help you master Java NIO Library, we have compiled a kick-ass guide with all the major Java NIO features and use cases! Besides studying them online you may download the eBook in PDF format! 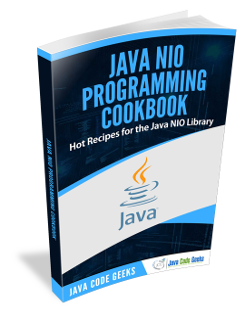 
Do not forget to close the channel after you are done processing the file so as to release operating system resources.

This was an example of how to create a file lock on a file in Java using FileChannel.