Vinod is Sun Certified and love to work in Java and related technologies. Having more than 13 years of experience, he had developed software's including technologies like Java, Hibernate, Struts, Spring, HTML 5, jQuery, CSS, Web Services, MongoDB, AngularJS, AWS. He is also a JUG Leader of Chandigarh Java User Group.

You can read about JUnit in Testing with JUnit


Want to be a JUnit Master ?
Subscribe to our newsletter and download the JUnit Programming Cookbook right now!
In order to help you master unit testing with JUnit, we have compiled a kick-ass guide with all the major JUnit features and use cases! Besides studying them online you may download the eBook in PDF format! 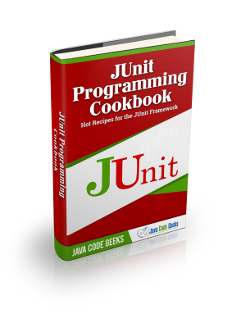 
In this example, we will see how we can cover examples of some of the scenarios where we need to test the void methods. We will be using Maven as our build and dependency tool for this example.

JUnit testing framework will help you test all your methods. It is a major tool in the arsenal of Java developers. We can test all type of methods irrespective of the method returning any value or not.

In our previous tutorials, we have seen many ways to test the methods those returning the value. In this example we will test those methods that don’t return any value.

Tip
If your method has no side effects, and doesn’t return anything, then it’s not doing anything.

Above line is from JUnit docs and tells everything about the methods.

We will be using the following technologies in our example.

Let’s begin with creating our example.

Tip
You may skip project creation and jump directly to the beginning of the example below. On next screen fill in all the details as shown below and click on the Finish button. With this, we are ready with the blank Maven project. At this point, our example is an empty Maven project with a blank skeleton. Let’s start with our example from here. We need to write some initial steps before start coding.

First of all we need to create the following lines in pom.xml file. These lines will fetch the JUnit dependency.
It also tells Maven to use Java 1.8 for compiling our code.

Now start by writing a java class that will prepare the core for our example. We will create a simple class which will be used later in this example for testing.

We will simply create a List and then add and remove from that, but with help of our class.
At line no 17, we are also throwing the NoSuchElementException(). We will also see how we can test this exception in our example. We have covered it here as it is thrown by the void method.

Now, we will create a test class that will help and test our MyList class above. We will cover each test case in details. First of all lets see how our class will look like.

Let’s examine each method in details and how we are testing it.

Output
We can analyze the output of our example in the JUnit tab of eclipse.

In this example, we have learned that how we can JUnit Test Void Method. We have also learned that how to catch the exception if it is thrown by a void method. Actually testing mechanism is same for all methods, but void methods are special as we don’t have any returning value to be matched for testing.

But as we have previously said that the method may not be returning anything but it may be altering the behaviour of our program somewhere. So we simply test that case and then it is easy to implement it.

This is a JUnit Test Void Method example.

This solution is not generic for all void methods.

Exactly this is not at all generic void testing. Rather than checking void test this post is checking list size that is irrelevant in current topic context

I think that the content in this article is useful for explaining how JUnit handles state change between tests, but it would be better if it addressed the significance of testing void. I know there really isn’t any, but it is what the article says it will address.

This is not at all a generic example and please make another example which will be more useful.