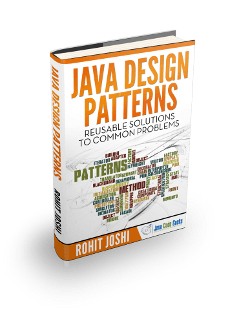 Design patterns can be categorized in the following categories:

Creational design patterns are used for the design of the objects instantiation process. These design pattern uses the inheritance to change the creation of the object. These patterns contain two recurring steps. First, they all encapsulate the actual knowledge that the system uses in particular classes. Secondly, they stashed the creation and composition of instances of these classes. The whole system knows the objects by defining their interfaces by abstract classes. Therefore, you have a lot of flexibility with the creative patterns in what is created, who creates it, how it is created and when.

Structural design patterns relate to the form of larger systems by classes and objects. Structural class models are used for composing interfaces or implementations by the inheritance. Consider, as a simple example, how two or more classes are combined in one. The result is that the properties of their parent classes are combined. This model is especially helpful for making class libraries that have been developed independently.

Behavior patterns are about algorithms and duty assignment between objects. Behavioral patterns describe the patterns of communication not only between objects or classes. These patterns characterize complicated flows which are hard to follow during runtime. You move your focus away from control to focus only on how objects are connected.

This section explains a real world example based on the java state design pattern in such a way to easily understand this pattern. Here will we take a real life example of developing a web Application for a client. The below image shows the steps required to develop the web application in an efficient and effective way.

After the implementation of the project, in Testing step various testing like manual testing, automation testing, integration testinng etc. is performed on the web application. Whenever the testing is completed the state further moves to the next state. The fifth step in web application is Maintenace, in this step the developer maintains the project after specific period of time. Once the Maintenace phase is done the internal state of the project will move to the last step of project that is Support. So, whenever the support step is finished again we can repeat all the six steps for developing any other web applicartion project for the client.

In the above code, we created an interface called a SmartTvState. In this interface we have defined a method known as switchOnOffSmartTv().

In the above code, we have created a StateDesignPattern class in which we defined the main() method. In the main() method we create a smartTv object of SmartTv class. Also we have created two objects of SmartTvState interface. Using the smarttv object we set the smartTv states such as switch On state and switch Off state and called their corresponding methods switchOnOffSmartTv() and switchOnOffSmartTv().

We saw in this article that this pattern can be implemented very easily. It is much easier to encapsulate each of these statements into separate classes than to write several if-else statements. Moreover, each State’s implementation can differ regardless of the other States. Without changing other states we can easily increase the number of states to make this pattern scalable and adaptable. The State Design Pattern allows us to change the behavior of an object when it changes its internal condition. It is much more easy to track all possible conditions by using state design patterns, and this guarantees a less unspecified behavior for our software applications. Many other ways of implementing a state pattern are available. For designing an efficient state pattern, the designer must list the potential states and pertain each other or define a sequence of states.